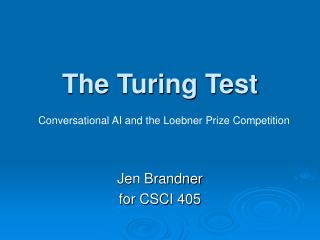 The Turing Test. Conversational AI and the Loebner Prize Competition. Jen Brandner for CSCI 405. What is a Turing Test?. It all started with A. M. Turing’s 1950 paper “Computing Machinery and Intelligence.”

Turing Machines (11.5) Longin Jan Latecki Temple University - . based on slides by costas busch from the course