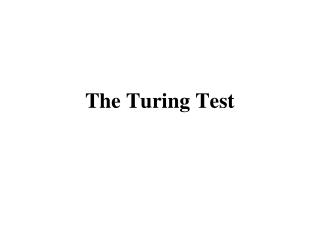 The Turing Test. What Is Turing Test?. A person and a computer, being separated in two rooms, answer the tester’s questions on-line. If the interrogator cannot tell whether he/she is talking to is a person or a computer, then the computer is viewed to be as intelligent as the person.

The Turing Machine - . what is turing machine?. it is a conceptual machine put forward by allan turing in 1938. it is

The Church-Turing Thesis - . chapter 18. are we done?. fsm  pda  turing machine is this the end of the line? there

The Turing Machine Revisited - . can a conscious machine exist? (mcon guys say yes, and here’s how he’d build it).

The Church-Turing Thesis - . lecture by h. munoz-avila. we have the notion of turing machines. transitions: (( p , 

The Church-Turing Thesis - . chapter 18. can we do better?. fsm  pda  turing machine is this the end of the line?