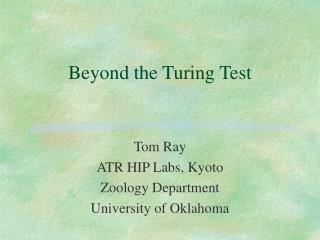 Beyond the Turing Test Beyond the Turing Test

Test ppt - . this is just for testing purpose.

PowerPoint Beyond the Basics - . staff development. working with designs apply a design from the design tab. insert a

Beyond PowerPoint - . be brief. limit what you put on slides focus on key points. be concise whenever possible. this. not

PowerPoint Beyond the Basics - . spring 2011. working with master slides . formatting graphics working with the picture

Beyond PowerPoint - . presentation tools, design, and delivery training for social sector professionals . my wife was

Mammal Test: an Interactive PowerPoint Presentation - . by bernard john poole and lorrie jackson. what is a mammal?. a