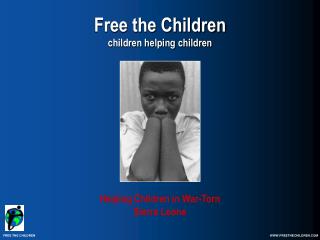 Free the Children children helping children. Helping Children in War-Torn Sierra Leone. March 30, 2010. Objectives: To develop an understanding of Sierra Leone. Question: What has been one of the main causes of the violence in the DRC? Children Helping Children School: - . i can help a friend in need by giving him or her a warm coat or by

Children Helping Children Atlanta - Saving the children is a usa based education charity organization. our goal is to

Free the Children - . rebecca nelson wwu. what is free the children?. an international youth movement that began in 1995

Helping Children make Changes - Transition. is one of the most important changes that will occur in a child's life. the

HELPING CHILDREN CHANGE SERIES: - . my child is not worried enough!!! what science tells us about helping children to

Children For Children - . when underage, underpaid factory workers in china are making toys for the leading western

Children Helping Children Mills Elementary – November 19 th -30th - . i can help a friend in need by giving him or her

Helping and Uplifting the Street Children - How empowering it is to send street children to school. this sight is very

Helping Your Children Through Divorce - When children are young and still living at home, divorce can be hard on them,