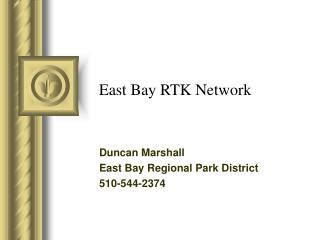 This presentation will probably involve audience discussion, which will create action items. Use PowerPoint to keep track of these action items during your presentation In Slide Show, click on the right mouse button Select “Meeting Minder” Select the “Action Items” tab RTK - . learning outcomes: you should understand how the right to know law may subject your work product to public

East Bay Dog Walkers - The pet nanny is fully insured and bonded. we have the knowledge, professionalism and expertise to

Kaiser Permanente East Bay - . cepid …. what is a cepid?. is it dangerous?. cepid…. the abbreviated name of a team of

Precision Farming Creating A RTK Network - Overview - . what are rtk networks ?. what are they? each base station is