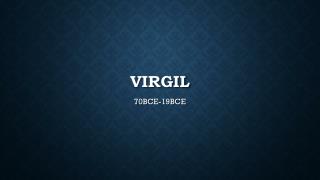 Virgil. 70BCE-19BCE. Publius Vergilius Maro. As is often the case, reliable biographical information is difficult to come by. Hosted by Virgil Christian &amp; Maiysha Warren - . end of session reminder. please stay at the end of the

Introducing Virgil’s Aeneid - . aeneas is popularly depicted as carrying his father from troy as it is being destroyed

The Adventures of Aeneas - . by: reilly hicks, brittany krugh , and a.j. mcdonald. background info of story. from the