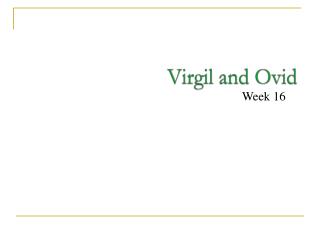 Virgil and Ovid. Week 16. VIRGIL 70-19 B.C. Publius Virgilius Maro was born in northern Italy, and very little is known about his life. The earliest work that is certainly his is the Bucolics , a collection of poems in the pastoral genre that have had enormous influence. allegory - . an allegory is a form of extended metaphor in which objects, persons, and actions are made to represent

Geoffrey Chaucer - . by jordan potter. early life. born in 1343 son to john and agnes the name “chaucer” came from a