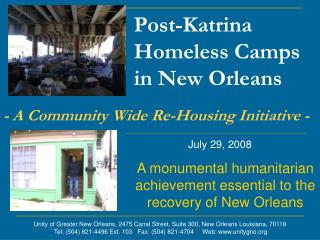 Post Katrina - . improving the rebuilding of highway 90 with advanced its networks and applications…. evaluating the

A House in New Orleans East: Before and After Katrina - . susan howell john

Homeless Camps in Seattle: Then and Now - . by emily pond.