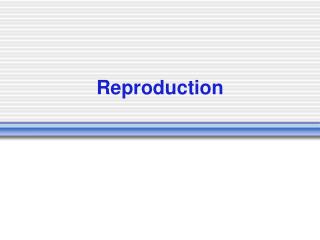 Reproduction. T he Cell Theor y. The 4 main points of the cell theory are: All living organisms are made of one or more cells Cells are the basic unit of structure and function in all organisms All cells come from previously existing cells Reproduction - . asexual sexual mitosis and meiosis. reproduction. a species is a group of closely related organisms that

Sexual Reproduction of the Flowering Plant - . learning objectives (1/4). state the structure &amp; function of the

Reproduction in Poultry - . young are not carried in the hens body develop inside a fertilized egg outside the hens body.

Nutrition and reproduction – the sheep model - . stewart m. rhind. why are nutrition-reproduction relationships

Canine Reproduction and Breeding - . factors to consider before breeding. availability of a good home health status