How did Mao establish a one-party state in China? - PowerPoint PPT Presentation 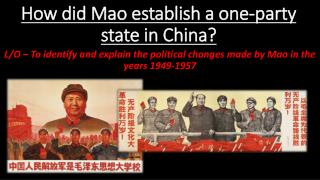 How did Mao establish a one-party state in China?

1 / 10
Download Presentation
How did Mao establish a one-party state in China?
194 Views

How did Mao establish a one-party state in China?. L/O – To identify and explain the political changes made by Mao in the years 1949-1957. The ‘One-Party State’. From 1949 China became a one party state . All other parties were suppressed in a series of purges from 1950-1952.

How did Mao establish a one-party state in China?

Chapter 33 Section 2: Communists Take Power in China - . aim: how did the civil war in china end? do now: complete the

Mao Zedong and China: Origins and Rise to Power - . ib history: authoritarian and single-party states. about the

China Since Mao - . rise of a superpower. assignment 4: deng xiaoping’s reforms. turning china into an economic

Communist China: Mao Zedong - . history of china. the boxer rebellion (1899-1901: against european and us control of

People’s Republic of China - . role of political parties. china is the most populous country in the world, and ruled by

China and the rule of Mao - . dynastic china . powerful emperors ruled china for thousands of years with the mandate of

China’s march to communism - . a century of upheaval. communism enters china in 1949. unlike russia, china arrived at

China under Mao Zedong 1949 - 1976 - . pages marked with a require written responses from you. place your written

Emergence of Mao Zedong - . mao’s early life. his father was a farmer and was fairly well off mao was expelled from or