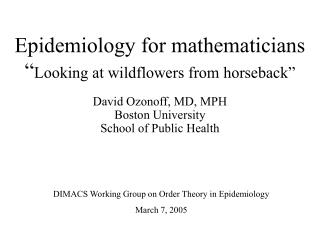 Epidemiology for mathematicians “ Looking at wildflowers from horseback” Epidemiology for mathematicians “ Looking at wildflowers from horseback”

13.3 The Age of Chivalry - The code of chivalry for knights glorified both combat and romantic love. 13.3 the age of

Developments in (all 30-50 or so) STDs: Global Epidemiology and Management - . george schmid, m.d., m.sc. dept of hiv

Epidemiology: Challenges and Answers in the Context of Globalization - . moyses szklo professor of epidemiology and

Theodore Roosevelt on horseback in the Dakota Territory in the 1880's, when he had moved west to live as a cattle - R.