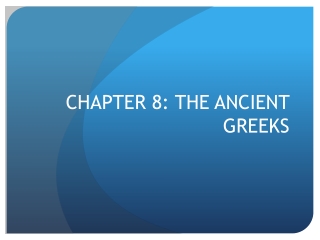 CHAPTER 8: THE ANCIENT GREEKS. Section 1: The Rise of City-States. Picture depicts life in some of the Greek city-states. Image taken from: bbc.co.uk. Geography of the Greek World. How the Greeks affected Europe's future - . by: lizzie ewing and ania sypek. intro. throughout history, the greeks have

Ancient Greece - . level one humanities. pre-test. what comes to mind when you think of ancient greece? where is greece?

Chapter 3 The Greeks From Myth to Reason - . compare the date ranges for significant events: greeks and hebrews. greek

Intro to City-States - . 1. what two seas did the ancient greeks travel in order to trade? . mediterranean sea black sea

Chapter 9 Life in Ancient Rome - . main ideas. in addition to their own developments in science and engineering, roman

Our Place in the Cosmos and Introduction to Astrophysics - . lecture 2 historical milestones in astronomy. the ancient

Chapter 4 Section 1 The Early Greeks page 116 - . friday, feb. 17. the ancient greeks. read about the geography of

Ancient Greece - . november 28, 2011. flashback. where were most ancient civilizations settled? what was greece’s

The differences between the Ancient Egyptians and the Ancient Greeks - . they both worshipped their gods. aphrodite

Ancient Greece - . how did geography impact greece?. ancient greece was not united under one government due to the