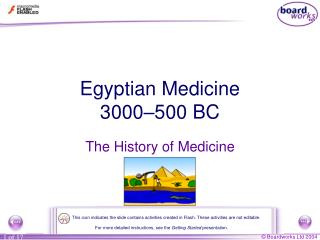 Egyptian Medicine 3000–500 BC . The History of Medicine. This icon indicates the slide contains activities created in Flash. These activities are not editable. For more detailed instructions, see the Getting Started presentation. Egyptian society.

Stone Age (1M yrs ago-3000 BC) - . from the stone age to the industrial revolution. stone age eolithic a million years