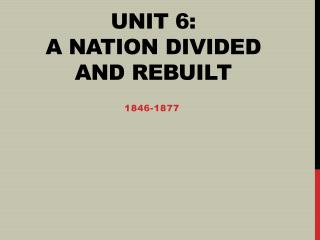 Unit 6: A Nation Divided and Rebuilt Unit 6: A Nation Divided and Rebuilt

The Nation Divided - . chapter 10. the wilmot proviso. the missouri compromise did not apply to the mexican cession the

ISSUES THAT DIVIDED THE NATION - . sol u.s. i.9a. slavery. while there were several differences between the north and the

A Nation Dividing - . 15-2. objectives. learn how the fugitive slave act and the kansas-nebraska act further divided the

Section 2-3 Mexico War to Divided Nation (Growing Pains) - . warm up:. what provisions were included in the missouri

The Coming of the Civil War - . why it matters john browns’ raid intensified tensions between north and south. the

9A Unit 1 Revision - . he was born on april 18th. aries. a year is divided into 12different star signs. aries. taurus.