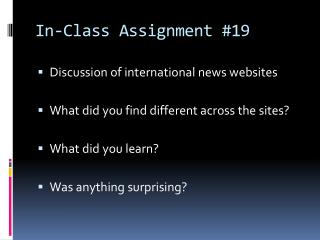 In-Class Assignment #19. Discussion of international news websites What did you find different across the sites? What did you learn? Was anything surprising?. Hearing the Other Side: Deliberative vs. Participatory Democracy Mutz, Ch. 5. The Social Citizen: Political Discussion. The Basics. Week 3 In-class Assignment 2 - . michelle olson has been a runner since high school, and had participated in numerous