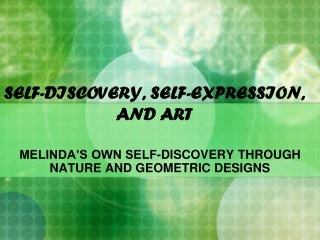 SELF-DISCOVERY, SELF-EXPRESSION, AND ART. MELINDA’S OWN SELF-DISCOVERY THROUGH NATURE AND GEOMETRIC DESIGNS. SPEAK by Laurie Halse Anderson. THEMES IN SPEAK. ALIENATION. Alienation is a state of being isolated or withdrawn either by external or internal forces. SELF-DISCOVERY, SELF-EXPRESSION, AND ART - . melinda’s own self-discovery through nature and geometric designs. speak

Self Expression - . by f elicia

Self-Discovery - . self-discovery can only occur if one is willing to undertake a journey. it is good to have an end to

ART for Self Discovery &amp; Healing - . believe in the power of art, creativity and people. ‘art for self

A SELF DISCOVERY - My name is masroor khan my favorite author is jane austen. her novel “pride and prejudice” is my

AUTHENTICITY &amp; SELF-EXPRESSION - . people have an intuitive validity, so they weren’t just trying to impress

Journey of Self-Discovery - . an introductory webquest for the motorcycle diaries.

Forming the Self and Collective Expression - . family and place. we all learn valuable lessons from others and from life

Self and Non-self - . amelia ireland and jane lomax. self and non-self. two types of biological process single

Self Expression, the Internet, and Risk Taking - . by josh and e.j. what is this?. self expression how one expresses

SELF-ESTEEM AND SELF-CONCEPT - . what is the difference and how do they affect each other?. definitions. self-concept is