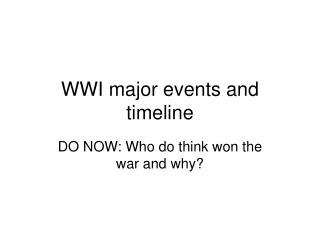 WWI major events and timeline. DO NOW: Who do think won the war and why?. WWI timeline 1914. June 28- Assassination of Archduke Franz Ferdinand, heir to the throne of Austro-Hungarian empire, in Sarajevo, Bosnia July 28- Austria-Hungary declares war on Serbia WWI major events and timeline - . do now: who do think won the war and why?. wwi timeline 1914. june 28- assassination of

Timeline Events - . late 1300s – wycliffe is the first to translate the bible into vernacular 1415 - jan hus is burned

Timeline of Events - . the cell and the cell theory chapter 4: structure and function of cells. microscopes. the first

Timeline Events and Review Materials - . american revolutionary war test. find the year, and label these events on your

Major Battles of WWI - . the aftermath the french paid a heavy price, as countless red-coated french troops had fallen in

Major Battles of WWI - . somme, passchendaele , vimy ridge, ypres, 100 day campaign. why do we learn about these

MAJOR BATTLES OF WWI - . battles - the western front. the battle of the frontiers,

Major Battles of WWI - . the total number of military and civilian casualties in wwi was more than 37 million. there was

The timeline of events: - . music video , hip- hop, posters and cd covers. the foundation of music