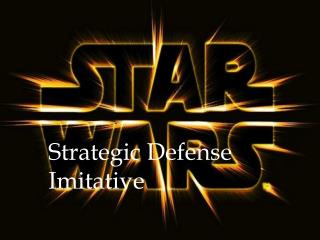 Strategic Defense Imitative . Background. In 1979, the Cold War was still raging between the United States and the USSR Both countries had a large number of nuclear missiles United States: 1,600 USSR: 1,500. Ronald Regan’s Visit . The Strategic Defense Initiative (SDI) - . by jacob lemons. proposal. the sdi was proposed by president ronald reagan on

Department of Defense Explosives Safety Board DDESB Strategic Planning - 2. strategic planning for the government by the

Defense - . dig . a dig (d) is awarded to a player whenever a player passes the ball which has been attacked by the