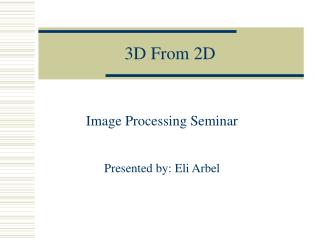 3D Viewing ( From 3D to 2D) - . some of the material in these slides have been adapted from the lecture notes of graphics

CV: Perceiving 3D from 2D - . many cues from 2d images enable interpretation of the structure of the 3d world producing

Seeing 3D from 2D Images - . how to make a 2d image appear as 3d!. output and input is typically 2d images yet we want

Perceiving 3D from 2D Images - . how can we derive 3d information from one or more 2d images? there have been 2

3D Solid Modeling Moving From 2D to 3D - . project lead the way, inc. extruding a 2d sketch. solids can be created by

Aromaticity: From Organics to Inorganics, From 2D to 3D - State key laboratory for physical chemistry of solid surfaces.