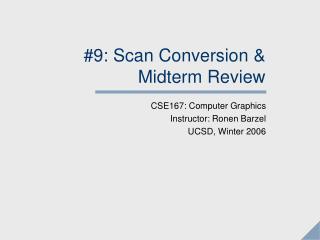 Scan Conversion or Rasterization - . drawing lines, circles, and etc. on a grid implicitly involves approximation. the

Midterm Review - How did the great depression of the 1930s increase racial, ethnic and religious conflict in us history?.

Midterm review - . writing poetry short stories. on the day of the midterm:. be on time! bring a sharpened #2 pencil!.