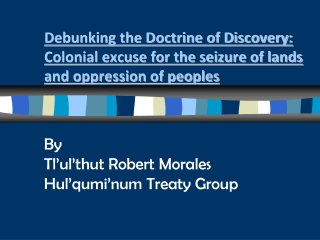 Debunking the Doctrine of Discovery: Colonial excuse for the seizure of lands and oppression of peoples. By Tl’ul’thut Robert Morales Hul’qumi’num Treaty Group. Doctrine of discovery. Alternatives for Resolving Climate Change? - . what should the law do?. 1. u.s. congress – clean air act (air