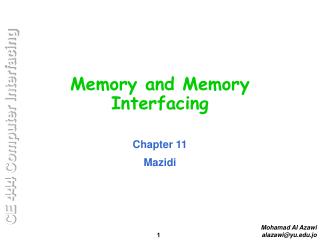 Memory Interfacing - . ece 511: digital system &amp; microprocessor. what we will learn in this session:. review

Interfacing External Memory - . rajiv nandivada. high level schematic. clock cycle of 10-20 ns (depending on its use).

Shared Memory and Shared Memory Consistency - . what is the difference between eager and lazy implementations of relaxed