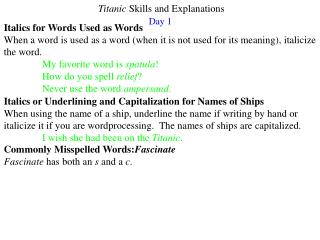 Titanic Skills and Explanations Day 1 Italics for Words Used as Words When a word is used as a word (when it is not used for its meaning), italicize the word. My favorite word is spatula ! How do you spell relief ? Never use the word ampersand .

Day 1 - . circuits. electric circuits – a complete, closed path through which electrons can flow. glue in “secret

Day 1 - . edgar allan poe was born on january 19 1809. because poe’s mother had dyed and his father had deserted the

Day 1 - . the 1913 armory show in new york city provided a most perfect opportunity to introduce modern art. the artists

Day 1 - . in a child’s christmas in wales, dylan thomas looks back at his childhood joyfully. relating his memories,

Day 1 - . http://www.brainpopjr.com/socialstudies/citizenship/ussymbols/. “this land is your land”. woody guthrie *he

Day 1 - . curious enough, paradise has been viewed as a beautiful garden by poets and storytellers in different ages and

Day 1 - . chapter 2 contrast equality with the rest of the men living in society (46). of the whole range of feelings

Day 1 - . being as the diary of samuel pepys pronounced peeps presents a personal look at seventeenth-century london, it