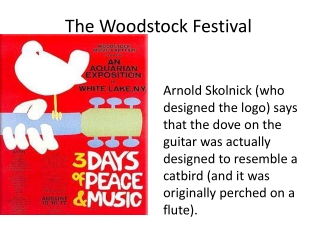 The Woodstock Festival. Arnold Skolnick (who designed the logo) says that the dove on the guitar was actually designed to resemble a catbird (and it was originally perched on a flute). Location(s) White Lake, New York (site of original festival)

The Woodstock Festival - . when &amp; where did it take place?. the festival became known as three days of peace

Year 5 Woodstock Art Festival - . the children were inspired by our ‘rivers’ theme to create a design on their

Woodstock - . 3 days of peace and music. beginnings. woodstock was assembled through the joint work of michael lang, john

Woodstock 1969 - . by: sarah buslewicz and nathaniel st. pierre. history of the festival. organized predominantly by

Woodstock, The Moon, &amp; Watergate - . not a warm welcome home. unlike wwii, vietnam vets were not welcomed home

Woodstock Georgia Hospice - Hospice is no longer a place but, rather, a philosophy of care that offers spiritual,mental,

The Woodstock Music and Art Fair - . by jeffrey maglish.

The Hippie Movement and Woodstock 69’ - . the beat generation. before hippies there were products of the beat