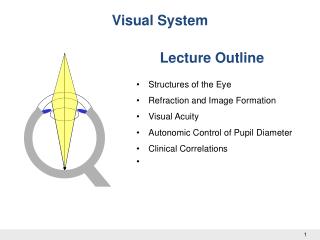 Visual System - . http://www.cis.rit.edu. much of the text material is from, “principles of anatomy and physiology

Visual system - . 1. the eye light and colors are perceived by human beings through their two eyes which transfer

Visual System - . i spy with my little eye…. electromagnetic energy enters the eye in the form of light waves.

Human Visual System - . 4c8 handout 2. image and video compression. we have already seen the need for compression we can

The Visual System - . dr. kline fsu. what stimuli are required for vision?. light - which can be thought of as discrete