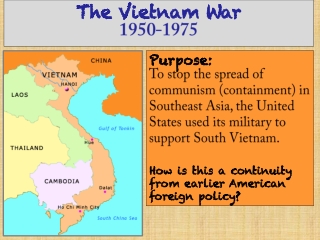 The Vietnam War 1950-1975. Purpose: To stop the spread of communism (containment) in Southeast Asia, the United States used its military to support South Vietnam. How is this a continuity from earlier American foreign policy?. U.S Presidents During the Vietnam War. The Vietnam War 1954-1975 - . chapter 31. background vietnam. indochina wanted freedom from the french after wwii. the