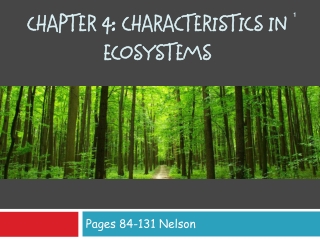 Chapter 4: Characteristics in Ecosystems. Pages 84-131 Nelson. Section 4.1. Recall: An environment includes biotic and abiotic components. Interactions between organisms and their environment can be divided into four levels: individuals , populations , communities , and ecosystems.