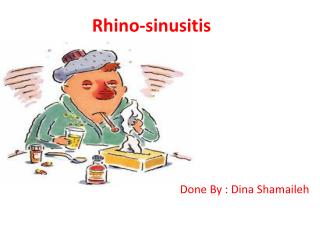 Rhino-sinusitis. Done By : Dina Shamaileh. Anatomy. The paranasal sinuses are a group of air containing spaces that surround the nasal cavity Each sinus is name for the bone in which it is located: Maxillary (one sinus located in each cheek) ALLERGY IN THE NOSE AND SINUSES (ALLERGIC RHINO SINUSITIS, HAY FEVER) - Http://allergytoday.com/ allergy in the nose

ALLERGY IN THE NOSE AND SINUSES (ALLERGIC RHINO SINUSITIS, HAY FEVER) - Http://allergytoday.com/ allergy in the nose

Rhino - . what are they like: poor sense of sight good hearing and smell group of rhinos is called a crash where: africa.

Sinusitis - . sinusitis is an extremely common part of the common cold syndrome rvs have been detected in 50% of adult

Sinusitis - . dr.emamzadegan ped.cardiologist. sinusitis. sinusitis is a common illness of childhood and

Chronic sinusitis - . definition. inflammation of the mucosa of one or more paranasal sinuses lasting for more than 3