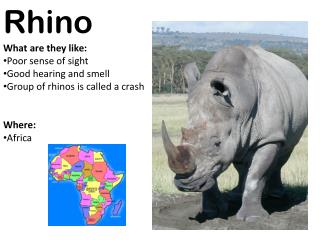 Rhino. What are they like: Poor sense of sight Good hearing and smell Group of rhinos is called a crash Where: Africa. Population: Under 3,000 individuals Why: Deforestation Killed by cat families Pollution Pesticide on grass Horn for Chinese medicine. Lizard. Black Rhino - . by: jackson williams. habitat. they live in grasslands or deserts in namibia, coastal east africa. why is

Rhino-sinusitis - . done by : dina shamaileh. anatomy. the paranasal sinuses are a group of air containing spaces that

Black Rhino - . by: lauren sabo. why are the black rhinos endangered?. black rhinos are known by their leathery black

Black Rhino - . by brant steinberg . introduction. do you know anything about the black rhino? they have horrible

The Rhino - . by: dirck commandeur. description. the rhinoceros is about 60 inches at the shoulder . both black and

Rhino Facts - . by: gurpreet. the name rhinoceros means nose horn and is often shortened to