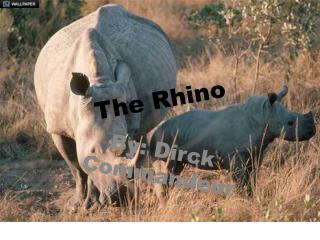 The Rhino . By: Dirck Commandeur. Description. The rhinoceros is about 60 inches at the shoulder . Both black and white rhinoceroses are actually gray. They are different in lip shape. The black rhino has a pointed upper lip, while the white rhino has a squared lip. The Black Rhino - . the black rhino is in critical condition because of hunters in africa where it generally lives. they

The Rhino Approach - . who we are what we do the rhino service creative approach accountability system the rhino

Rhino - . what are they like: poor sense of sight good hearing and smell group of rhinos is called a crash where: africa.

The Black Rhino - . the black rhino is in critical condition because of hunters in africa where it generally lives. they

The Black Rhino - . by adam w. and connor l. human impact good, and bad. - humans have taken up much of their habitat due

Black Rhino - . by: jackson williams. habitat. they live in grasslands or deserts in namibia, coastal east africa. why is

Rhino-sinusitis - . done by : dina shamaileh. anatomy. the paranasal sinuses are a group of air containing spaces that