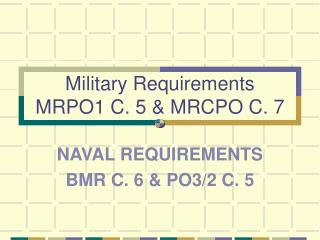 U.S. Military Womens - A look at women who serve in america's military, as the first two women soldiers make history by

CETD - . military requirements for petty officer third class. exit. damage control is the responsibility of which of the

The Military Uniform and Appearance Standards - . motivation. from the ancient greeks to the armed forces today, the

Requirements - Requirements: first ideas requirements should state what a system will do but not how it will be done. a

Requirements Inception - . based on presentations by g. mussbacher, g.v bochmann, n. niu, with material from: wiegers: