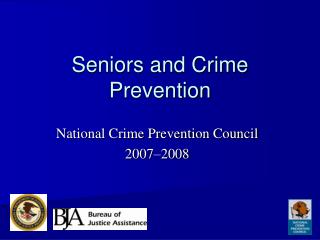 Seniors and Crime Prevention. National Crime Prevention Council 2007–2008. Goal of This Presentation. To examine the various crimes against seniors and to look at what preventative measures can be taken to prevent them. Objectives. Review current data and future projections

Crime Scene Investigation - . crime scene investigation. scenario police have been called to a one-room apartment to

How has crime and punishment changed over time? - . walt: produce a historical documentary to show how and why crime and

Neighborhood Watch - . what is neighborhood watch?. community based crime prevention program the eyes and ears to help

Financial Crime: What does it mean to Investec? - . mlros.com february 2007. financial crime:. what should we consider?