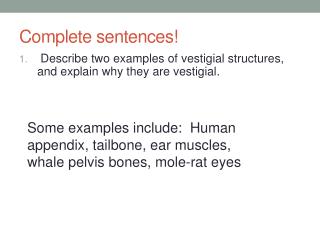 Complete sentences!. Describe two examples of vestigial structures, and explain why they are vestigial. Some examples include: Human appendix, tailbone, ear muscles, whale pelvis bones, mole-rat eyes. You must answer in a complete sentence!. Unit One Grammar Practice - By kristi waltke a sentence is a complete thought. here are some sentences. i asked daddy

August 14 - . ***find your assigned seat as shown on next slide. - bellwork : complete the graphic organizer – skip a

“Cub Pilot on the Mississippi” - . study guide : the paper you create in class today is your study guide for

Types of Sentences - . the simple sentence. what is a sentence ? a group of words with a subject, a verb and a complete

Chapter 6 - . industrial revolution. warm up. warm- up how did inventions like the telephone, automobile and airplane