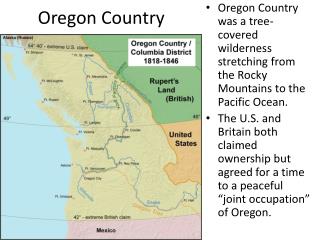 Oregon Country. Oregon Country was a tree-covered wilderness stretching from the Rocky Mountains to the Pacific Ocean. The U.S. and Britain both claimed ownership but agreed for a time to a peaceful “joint occupation” of Oregon. Discovering Oregon Lewis & Clark. Oregon Country - . background info. polk used the idea of annexing the oregon country as part of his campaign in 1844.

OREGON COUNTRY - . chapter 13 section 1. the lure of oregon . in the 1820’s the white settlers owned much of the land

Oregon Country - . lure of oregon. american’s claim to oregon was based on the lewis and clark expedition. oregon

Oregon Country - . chapter 12 section 1 - 5. oregon fever. the rumors of a harsh life in the great plains led to slow

T he Oregon Country - . by: natalie, brooke, and ian. the oregon country. located between pacific ocean and the rocky

Missionaries in Oregon Country - . learning target. i can describe the relationship catholic and protestant missionaries

WHY WAS THE OREGON COUNTRY SO APPEALING? - . the soil was fertile temperatures were mild year round and rainfall was

Oregon - 5 th grade. oregon . the northern and southern borders of the oregon country was from the rocky mountains to the

Oregon - The little state that could. oregon. and. the death with dignity act. presented by: maddie miller lesedi

OREGON - . by alex b., ian n., and george m. nickname, region in the u.s., capital city, major cities, and population.