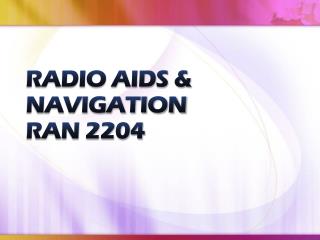 RADIO AIDS & NAVIGATION RAN 2204. What is RADIO?. Radio is wireless transmission through space of ELECTROMAGNETIC WAVES in the approximate frequency range from 10kHz to 300’000MHz. Radio Aid is a Navigation Aid Utilizing Radio Waves. What is NAVIGATION?. Lesson 4: Visual Aids to Navigation - . learning objectives:. upon completion of this lesson, the student will: be

AIDS - . by n.w. hiv and aids are two different diseases you can get aids like you get a cold or flu aids has three

What is HIV/Aids? - Homepage. ymca hiv/aids. navigation. what is hiv/aids?. what is

Navigation - . learning objectives. explain the differences between pilotage and dead reckoning. list at least 7 items of