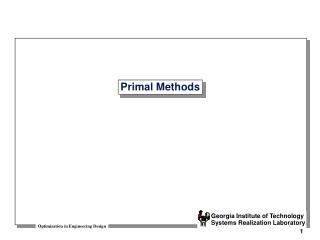 Primal Methods. By a primal method of solution we mean a search method that works on the original problem directly by searching through the feasible region for the optimal solution.

PRIMAL RELIGIONS - . the religions we hear of today are only the tip of the iceberg and are relatively new compared to