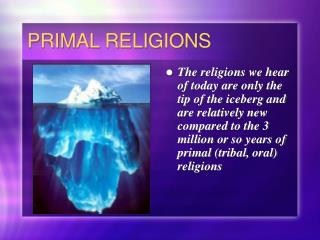 PRIMAL RELIGIONS. The religions we hear of today are only the tip of the iceberg and are relatively new compared to the 3 million or so years of primal (tribal, oral) religions. Primal Religions continued… - . totem activity. think of someone you respect, someone you can describe to me in detail.

Primal Methods - . by a primal method of solution we mean a search method that works on the original problem directly by