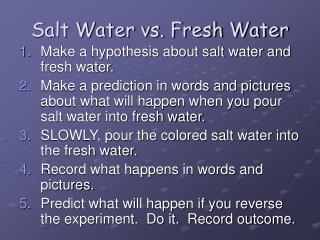 SALT WATER VS FRESH WATER - . the similar and different characteristics. what’s the difference?. what is salt water?.

11.1 Fresh Water and Salt Water - . earths water. earth looks to be covered in water. almost looks as though we

Salt Water - . properties of salt water. salinity is the amount of dissolved salts in water the salinity of the oceans

FRESH WATER - . the great lakes. thanks to michael w. rowan, ph.d. for most of this presentation…. part one. the great

Fresh Water - . rivers. what is erosion? erosion is the process by which soil and sediment are transported from one

Fresh Water - . fresh water. only 3% of the water on earth is fresh water: hydrologic cycle shortages do occur

Fresh Water - . alexis marie wood. characteristics. in a fresh water ecosystem, the trees and plants are full of animals.

Fresh Water - . runoff. rain water that does not sink into earth’s surface, but instead runs across is called runoff.