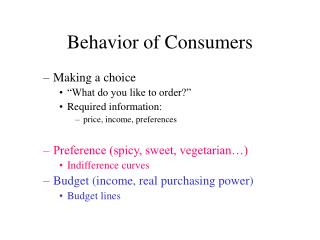 Behavior of Consumers Making a choice “What do you like to order?” Required information: price, income, preferences Preference (spicy, sweet, vegetarian…) Indifference curves Budget (income, real purchasing power) Budget lines What do you like to have if you can afford anyway?

What is Consumer Behavior? - . chapter 1. overview of consumer behavior. every day interactions important to: marketers

Cultural Effects on Consumer Behavior - . a survey of purchasing behavior as affected by the values consumers learn from

Consumer Behavior - . without cb - i am nothing!. who are consumers?. people who buy products people who use products

Consumers Rule Chapter 1 - . factors in consumer behavior. the story of gail in the marketplace… demographics