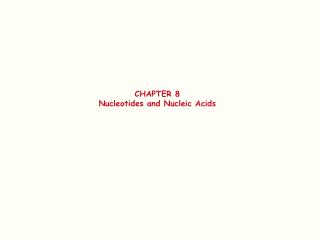 Chapter 16: Equilibria in Solutions of Weak Acids and Bases - . weak acids. all weak acids behave the same way in aqueous

Nucleotides and Nucleic Acids - . the basics. nucleic acids were first isolated by friedrich miescher in 1869.

BIOCHEMISTRY - . biochemistry is the study of the chemical processes and transformations in living organisms .