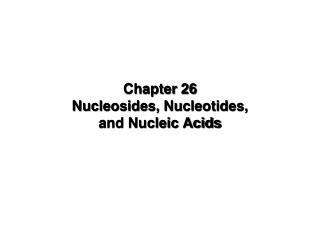 Chapter 3 Structures and Functions of Nucleic Acids - . nucleic acid. a biopolymer composed of nucleotides linked in a

Microbial Nutrition - . i. the common nutrient requirements of microbial cells. &gt;95% of dry weight of bacterial

The Chemistry of Acids and Bases - . chapter 17. strong and weak acids/bases. acids and bases into strong or weak ones.