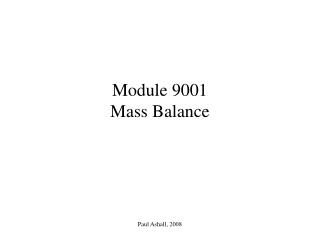 Module 9001 Mass Balance. The accounting of all mass in a chemical/pharmaceutical process is referred to as a mass (or material) balance. Uses. ‘day to day’ operation of process for monitoring operating efficiency

Mass Balance - . benno rahardyan ftsl-itb. mass balance. the law of conservation of mass states that mass can neither be

LECTURE 4 Mass Balance - . the accounting of all mass in an industrial chemical process is referred to as a mass (or

The Balance Equation and the Mass Balance - Outline. the balance equation the mass balance rate equationsteady-state