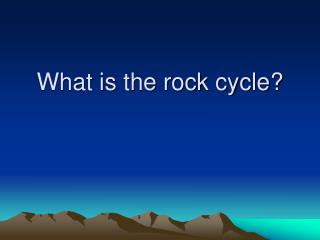 What is the rock cycle?. The Rock Cycle. Chapter 4 Pages 90-111. What is the Rock Cycle?. Process in which: A rock forms A rock changes from one type to another A rock forms again by processes on and in the Earth. Three Types of Rock. The three types of rock are: Sedimentary Igneous Rock Forming Process, the Rock Cycle, and THE Rocks - . review of minerals. what are the four characteristics of a

Rock Structure and Fault Activity - . chapter 9. what is structural geology. the study of the forms of the earth’s

Sediments and Sedimentary Rocks - . significance for climate and ccs. form at the surface, so directly influnced by

The Cycle - . 5. unit 5. learning objectives describe the accounting cycle and fiscal period and the steps necessary to

The 100 Kyr cycle - . agnes barszcz. who wants to be a climatologist?. 2 teams: the aphelions the perihelions rules