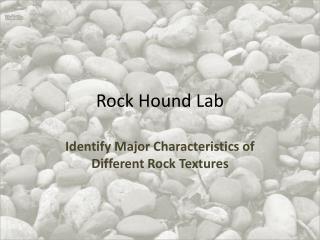 Rock Hound Lab. Identify Major Characteristics of Different Rock Textures. Igneous rocks can be identified by the determination of the composition and texture of the rock. . ROCK IDENTIFICATION LAB - . what type of rock is this? where or how is it formed?. obsidian. mafic (black) extrusive

Sedimentary Rock Lab - . use your sedimentary rock lab handout as you look as these

NEWS-HOUND - . may 2010. welcome to our may newshound i can’t believe that after months of planning, we are now only 5

Hound Group - . hound group. may be the oldest purebred dogs. they are a very diverse lot with a common ancestral trait

Powder Hound Transportation - Started in 2008 powderhound has served over 10,000 clients visiting the colorado area. from