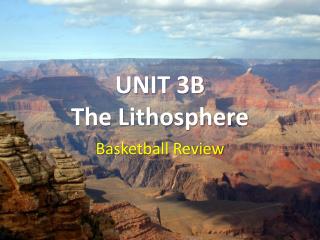 UNIT 3B The Lithosphere. Basketball Review. QUESTION 1. Who is considered to be the “Father of Modern Geology”? Harry Hess James Hutton Alfred Wegener Charles Lyell. QUESTION 2. UNIT 3A The Lithosphere - . basketball review. question 1. which of the following is not a defining characteristic of a

Unit 3b - . what you are assessed on:. ideas, imagery, vocab and detail (content) structuring your ideas and writing

Unit 3B REVIEW - . what is a ratio?. a group of students had a choice of either hamburgers or pizza for lunch. there were

The Lithosphere - . what are the different types of rock? how does the rock cycle affect different phenomena in our

The Lithosphere - . living on shaky ground. the lithosphere is the outer shell of the earth including the crust and the

Sophomore English Unit 3B - . take notes! vocabulary is awesome. it, like, lets us say stuff. . harass. (v.) to disturb,

Unit 3B – Functions Review - . test monday!. describe the relationship between x and y. which of these data sets

Biology 101 Unit 3B - . day seven. before class starts…. make sure you turn in your work from yesterday algae notes-

3B - UNIT 9 - PART 2 - . by lilian marchesoni http:// lilianstoolbox.pbworks.com. comparatives and superlatives. the son