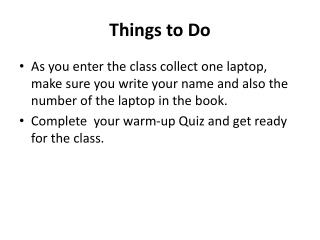 Things to Do. As you enter the class collect one laptop, make sure you write your name and also the number of the laptop in the book. Complete your warm-up Quiz and get ready for the class. There is a big difference between reproductive cloning and therapeutic cloning. Things To Do. - Things to do. pick up cloning and selective breeding sheets. warm up. what are the building blocks of

Things to do - . proposal / human subject consent form solution to assignment 2 will be up at 1:05pm feedback on labs

Things to DO - Planning to buy a business,? here are the things you should consider before starting your

Things To Do - . relax and bask in the warm californian sun anywhere within our intimate village resort setting filled

Things to do and - . things not to do at school. sara forte 2 e. you must listen to the teacher… ” this is a dream

Romantic Things To Do - For more details visit us : http://www.summerfunguide.ca romantic things to do are in the arms of

Benmiller Things To Do - Brunch at benmiller to compliment the natural setting of the benmiller, brunch at the inn is a

Reading: things to do - . principles. “researching” and “teaching” are more effective for deep learning than

Random Things To Do - For more details visit us : http://www.summerfunguide.ca ontario is a beautiful place to be during

Random Things To Do - Visit us : http://www.summerfunguide.cawhat ever may be your feelings, ontario surely have a lot to

ROMANTIC THINGS TO DO - Located in the heart of toronto, the toronto entertainment district is where many big things

Things I Like To Do - Eat yummy food! spend time with friends! karate! eat yummy food i need to eat at least five times