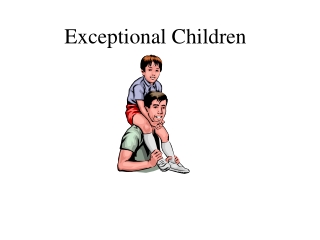 EXCEPTIONAL CHILDREN - . who are identified as exceptional?. 6.5 million children in the u.s. categories include:

THE OHIO CORE and the IMPLICATIONS FOR EXCEPTIONAL CHILDREN - . background. created by sb 311 new graduation requirements

Gifted Children: A Special Variety - . justine cauley, miranda manley, and mark berg based on a presentation by: julie

Successful Parenting of At-Risk Children - . a guide for foster parents and other caregivers. my background. m.ed. in

Violence Against Children by Children – a Growing Concern - . violence against girls in africa 11-12 may 2006 united

Dear On behalf of the Parents of Exceptional Children (POEC), I invite you to - Participate as a raffle donor for our

SAVE THE DATE! Parents of Exceptional Children Golf Tournament