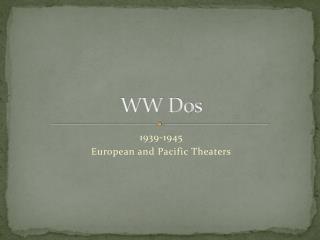 WW II - . war begins. dictators seized control of their nations by force after ww i and during the depression. adolf

WW II - . people. hitler. appointed chancellor of germany. author of mein kampf. seen as the “savior” to the german

WW II - . ww ii was going on for years before the us became involved. japan made the usa become involved on december 7,

WW I - . what was the u.s. doing while europe was fighting wwi?. the u.s. tries to stay neutral (not take sides).

WW WATERY GRAVES - . nickel ore demand. 2012 at 50k tons/shipment. significant demand for nickel ore in china as it is

WW#11: PARAPHRASING - . putting someone else’s words into your own words without taking away the point from their

WW ll quiz - . by mia. get a piece of paper and a pencil and write down the answer down. e.g. a b c a b there are five

WW 2 Jeopardy - . ap and us history. the italian fascist leader. benito mussolini (il duce). the president of the usa