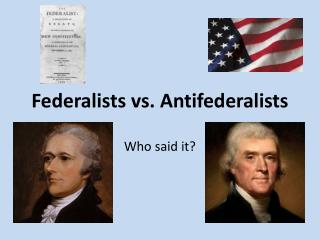 Federalists vs. Antifederalists. Who said it?. Quote 1.

The Origins of American Politics - . liberty vs. order. overview. the first political parties arose because of a

Chapter 8 Confederation to Constitution - . the chapter describes the development of the us government from the articles

War of 1812 - . election of 1796. washington leaves office separation within political groups: federalists and

Alien &amp; Sedition Acts - . the alien and sedition acts marked an attempt by federalists to suppress opposition at

Chapter 8 REPUBLICAN ASCENDANCY: The Jeffersonian Vision - . north america in 1800. “the peaceful revolution”: the

Andrew Jackson - . the president for the common man. review: election of 1824 – “the corrupt bargain”. evolution of

Federalists vs. Anti-Federalists - . federalists. they wanted a strong federal, or national government. they argued that

Section 9.3: The Federalists in Charge - . today ‘s essential question: how did political disagreements lead to the

The History of the Bill of Rights - . in order for the constitution to pass, the federalists promised to add a bill of

Interim - Feb 2014. interim. why did the framers promise to add a bill of rights to the u. s. constitution following

The Jeffersonian Era - . “we are all republicans, we are all federalists.”. despite federalist fears, jefferson