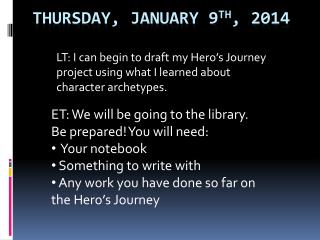 LT: I can begin to draft my Hero’s Journey project using what I learned about character archetypes. ET: We will be going to the library. Be prepared! You will need: Your notebook Something to write with Any work you have done so far on the Hero’s Journey. Thursday, January 9 th , 2014. Thursday January 9, 2014 Bellwork #4: - . create a variation of the sentence by using everything we have noticed about

Thursday 16 th January 2014 Vicky Dean - . outcomes of session. relate to others in the group and identify the purpose of

Thursday, January 24 th - . objective. do-first. you will be able to explain the key principles of the free enterprise

Thursday, January 16 th - . bell work : please turn in your newsletter to the homework bin and pick up the handout on the

Thursday, January 19 th - . please complete the warm up and write down your homework please have your own angle matches

Thursday, January 10 th - January is national get organized month!. thursday, january 10 th. come up to the podium for a

Thursday January 30 , 2014 - . hello! i missed you! please grab a sheet from the front table and begin working on it

Thursday 30 th January 2014 – Charter of Brussels - . joint call for the creation of european and international